The working principle, structure, characteristics and applications of a self-sealing blind plate used in the process device of the ultra-high pressure valve hydraulic test bench are introduced in this article.

1. Overview
According to relevant regulations, each valve must be subjected to a pressure test before leaving the factory, including a pressure strength test and a sealing test. With the increase of valve parameters, the requirements for valve inspection and test equipment are getting higher and higher.

2.1 Axial sealing
Axial sealing (Figure 1) has good sealing performance. When the testing blind plates at both ends are opened to both sides due to the thread gap and the elastic deformation (stretching) of the screw rod under the action of the internal pressure, the blind plates and sealing ring can be displaced in the valve channel to ensure sealing. If a greater clamping force is used to make the testing blind plate not move under the action of internal pressure, it is easy to damage the valve and affect the service life of the valve. Through design calculations, the axial gap is controlled at 0.6 to 0.9 mm under high-pressure conditions, which can ensure the sealing performance. The ultra-high pressure valve with large diameters is affected by its weight due to the axial seal, which causes the unilateral clearance to increase, and makes the sealing difficult to control; there is a risk of extrusion of the rubber ring under high pressure. Different pipes have different groove sizes, and blind plates with different sizes are required. After the test, the blind plate is difficult to disassemble. 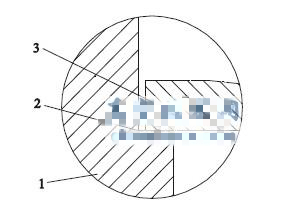 2.2 The sealing for end faces
The sealing for end faces is shown in Figure 2. The processing accuracy of the blind plate is low, and it is suitable for matched pipes of different sizes. The testing blind plate has good versatility. After the test is completed, the tooling is easy to disassemble. Unilateral leakage is avoided due to the weight of the valve during the valve's test. Because the internal pressure of the ultra-high pressure valve with large diameters is very great, affected by the thread gap and the elastic deformation of the screw, the blind plates at both ends will open to both sides, and the end seal is easy to leak; the higher the pressure is, the easier it is to leak. 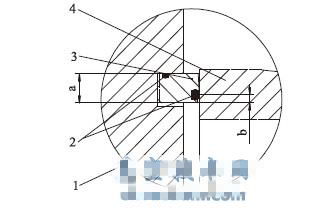 The end face self-sealing blind plate has good sealing performance. The higher the pressure is, the better the sealing performance becomes. It solves the various problems of different valve tooling for valves with different diameters. It is easy to disassemble; the problems and risks of the increased unilateral gap due to the dead weight of ultra-high pressure and large-diameter valves, difficult control of the sealing and the sealing ring being easy to be squeezed under high pressure are avoided. 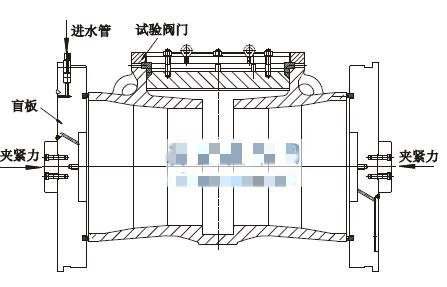 Figure 4 The strength test of the valve